Virtual reality (VR) headset manufacturer Pimax made some major waves in the industry when it first launched a Kickstarter crowd-funding campaign back in 2017, managing to smash its funding goal of $200,000 USD by raising a whopping $4.2 million. It promised a lot, wider field of view (FoV) and improved resolution over rivals like Oculus Rift and HTC Vive just two of the features. VRFocus first got its hands on the headset during CES 2018, and plenty has happened since then with the 5K version being superseded by the 5K Plus. So with orders now being fulfilled, it was time to take a closer look at what Pimax was offering.

Straight away it was easy to tell Pimax was taking CES 2019 even more seriously than the previous year. The stand had grown from a single prototype Pimax 8K headset on display to a booth with five demo areas, each showcasing different parts of the Pimax ecosystem.

First up, the $699 Pimax 5K Plus, likely to be the more popular of the two as it’s cheaper and doesn’t need as powerful a PC to run. Straight away impressions were good, yes the headset is wider than rivals and feels a little more front heavy but what you get in return is exactly what VR enthusiasts have been after. That wider 200-degree FoV just seems to wrap around your vision – like when the curtains at a cinema open wider for the feature presentation – presenting even more of a VR visual treat for users to enjoy.

And then there are the screens (not just the resolution), providing a rich, and detailed environment, with colours that popped and no discernable sign of screen door effect. Unlike CES 2018, this time Pimax had several experiences to test the headsets out with, with underwater title theBlu first up as it was used the previous year. And what a difference a year makes. This may have been on the 5K Plus – instead of the 8K in 2018 – but theBlu had never looked better, almost as if you’re inside a David Attenborough documentary at the bottom of the ocean.

However, standing there and admiring the view is one thing, handling some fast-paced action is another challenge entirely. Thankfully, due to Pimax’s SteamVR support, there was some Beat Saber to hand. Using standard HTC Vive controllers – the setup also featured Steam Tracking 2.0 – the headset easily handled the frantic rhythm action title, with its dazzling light show and continuous block movement. It didn’t have the punch or wow factor of theBlu, yet it was more the speed that VRFocus was interested in and whether that created any unwanted aberrations. 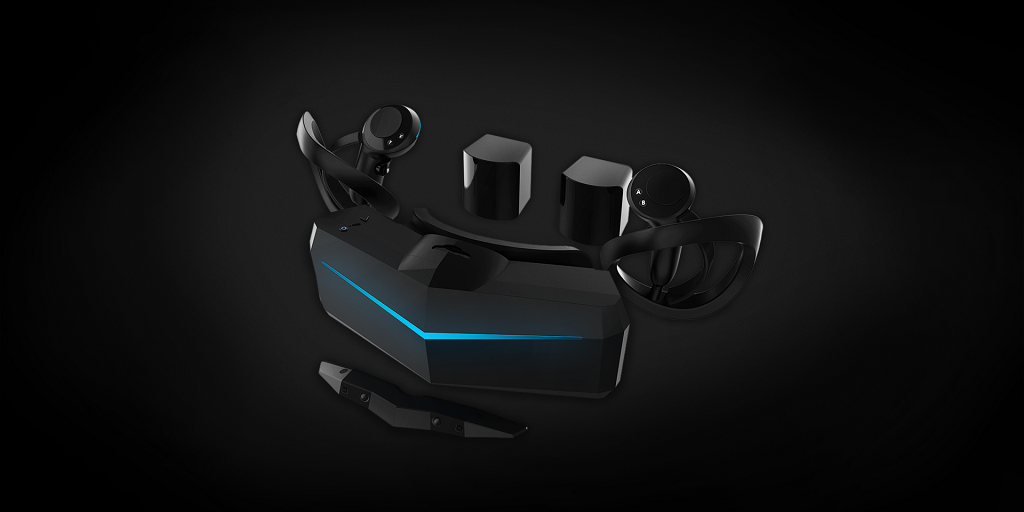 Having put the Pimax 5K Plus through some basic paces it was time to check out the two modules the company was showcasing. Firstly there was the hand tracking module which can be attached to the front of either headset. With the tech supplied by Leap Motion, if you’ve ever used a Leap Motion product you’ll know what’s being offered here.

The was no interactive demo as such, nothing to pick up, point to or touch, just some very trippy hand visuals that you could wave about in front of your face. Leap Motion’s tech is decent enough that it can detect individual finger movements, and the sensors FoV is wide enough that you shouldn’t have trouble using your hands at the Pimax screens widest points.

It was a shame there wasn’t more to actually do, but then again the modules are still in development so Pimax possibly didn’t want to push the tech too far on this very public outing – although Leap Motion isn’t exactly new anymore.

This proved to be a great little trial as it tested both the speed and accuracy of 7invensun’s technology. After a quick calibration – which is always the same, look at several dots one after the other – it was time to start giving those moles the evil eye. For the most part – around 90 percent of the time – the eye tracking worked exactly as you’d hope, keeping up as the gaze flitted between the digital moles in rapid succession.

There were only two or three times when a mole wouldn’t ‘pop’ and disappear, needing to look at another mole before looking back. While further testing would be needed to really put the eye tracking through its paces, what was offered certainly proved to be an impressive stepping stone. 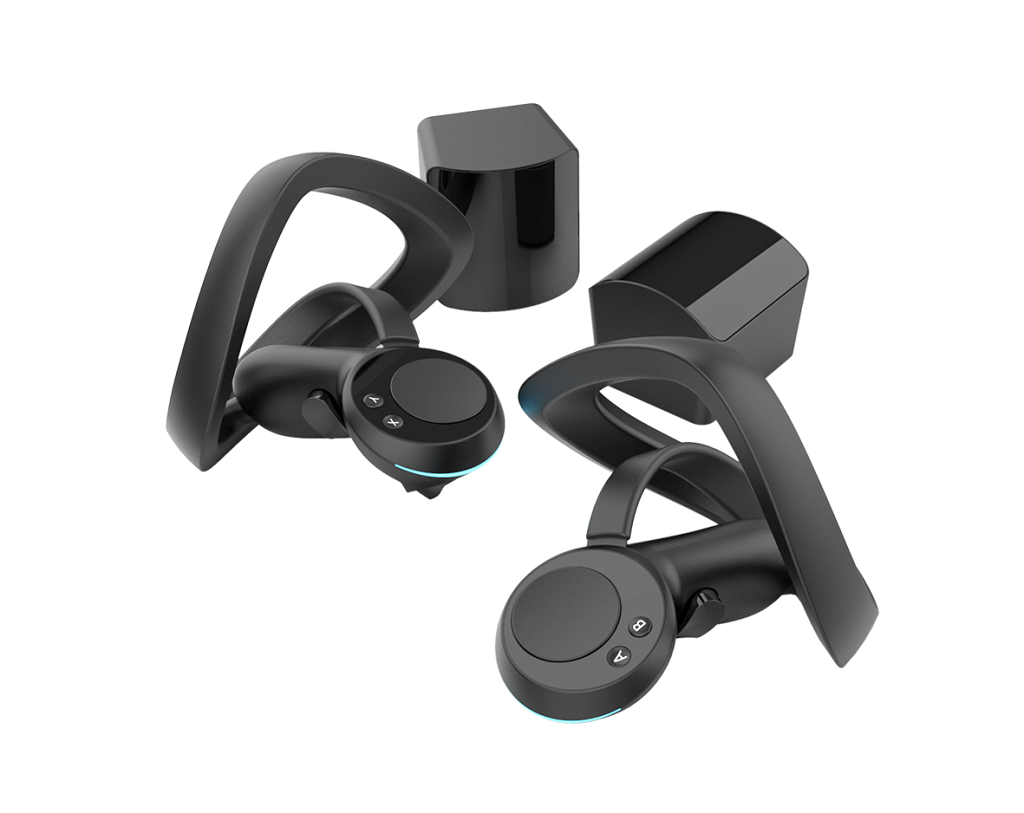 Pimax 5K Plus BE

Time for the headset most consumers aren’t going to get a look at, the Pimax 5K Business Edition (BE). There will, in fact, be a Pimax 8K BE version as well but this wasn’t on display. There are two big differences between the consumer Pimax 5K Plus and the Pimax 5K BE, and they are price and screen – plus companies also get additional warranties and after-sales service. The Pimax 5K BE retails for $999 and comes with an OLED screen rather than the CLPL (Customized low persistence liquid) found in the other two.

Did the OLED display look good in comparison? It certainly seemed impressive, with the sort of bold colours and detail you’d expect of an OLED. But there wasn’t enough of a difference that you’d want to spend the extra cash just for the display, the normal Pimax 5K Plus does a good enough job.

Looking like an almost exact replica of the Steam Knuckles controllers, VRFocus had hoped to test the Pimax version. Unfortunately, the controllers at the stand were only basic prototypes, the buttons had travel, and the strap that tightens around the back of the hand worked but nothing else.

In terms of comfort, the controllers felt great, with easy access to the grip and trigger and the strap held the controller nicely in place when trying an action such as throwing. Plus they seemed nicely weighted even though they do look bulky. Until VRFocus can actually try the controllers with a VR experience we’ll hold off any further judgement until then.

And finally the main event, the headset that put the company on the map, the Pimax 8K. Looking no different from its brethren from the outside, the top end version should have rival headsets a little worried.

Boasting 2 x 3840×2160,16.6 Million pixels in total, the detail was everything you could hope for. Once again testing it with theBlu, there was a noticeable jump in quality over the 5K Plus – which you’d hope for – making the underwater environment look like you were staring directly into an aquarium. It’s like trying to describe VR to someone who hasn’t put a headset on, there’s just more of everything apart from the one thing you don’t want, screen door.

Having that much resolution just gives you so much detail, encouraging you to peer at and into objects even more than normal, as it all looks so vivid and spectacular. Switching to The Elder Scrolls V: Skyrim VR had a similar effect with Bethesda’s epic fantasy adventure looking even better – the headset possibly pushing the title a little too far at points.

Pimax looks to be coming into its own in 2019, with the next 12 months likely to make it a serious contender in the VR market. VRFocus will be keenly following the company’s progress, and will eventually bring you a more in-depth analysis.